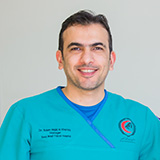 Dr. Ikdam M. Alkarkhi
Director and Veterinary Consultant
Dr Ikdam is the Director of SWFH and acts as Veterinary Consultant and Clinician in SWFH. He graduated from the University of Baghdad, Iraq as Doctor of Veterinary Medicine in 2001 and obtained his Masters in Avian Pathology from the same institution in 2004. He previously worked as an Avian Veterinarian for the Animal Resource Centre, Ministry of Environment, Qatar.

Dr Ikdam had a leading role in the foundation of SWFH in the year 2008 and within one year of operation, the case numbers jumped to an unexpected high. In 2009, the Management felt that the existing facility needed to be expanded to cope with increasing falconer’s demands in the region to one that could offer an expanded clinical, laboratory services. He supervised the task of building a new state of the art falcon hospital from designing to equipping to furnishing and staffing the new hospital.

As a committed veterinarian, he exercises a leading role in the day to day operation of the hospital; supervising in registration of the falcons presented to the hospital, preliminary examination, radiography and endoscopy, surgery and the issuing of prescriptions for medicines. Dr. Ikdam also introduced the idea of falcon passports, an identification card that proves the falcon’s identity and also mentions if the falcon has been vaccinated and health certificates that are pre-requisites for legal transportation of falcons in the region. He also developed a falcon feather bank with SWFH procuring, storing and using feathers specific to each species presented to SWFH. He was also instrumental in constructing a museum dedicated to falcons and falconry with in SWFH.

Dr Ikdam took a leading role in co-hosting with the International Falconry Association (IAF) & Conservation of birds of prey International Conference on Falcon Medicine in 2014, 1st of the kind in Qatar.

He is also involved in clinical research of falcon medicine ad is keen to strengthen all the sections of SWFH.